It appears American Airlines is also having a spring promotion for buying/gifting miles with up to a 75% bonus depending on how many miles you purchase. I'm not sure how long this particular promotion has been going on but I received an email today saying that the promotion is set to end soon on April 28, 2016 so I am assuming it has been going on for some time now. 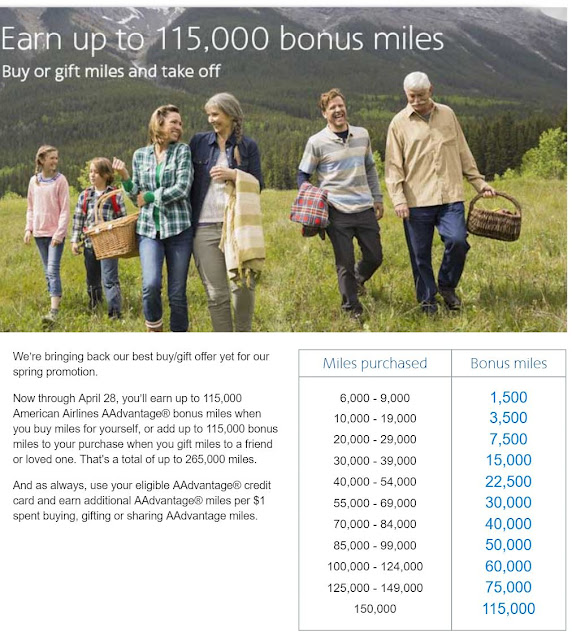 Here are the details of the promotion. So if you max out the promotion and buy the full 150,000 miles for $4,425 you'll receive an additional 115,00 bonus miles equating to a total of 265,000 miles which amounts to a cost of exactly 1.67 cents per mile which isn't horrible considering they are worth around 1.7 cents by many standards. This offer is set to expire at midnight on April 28th, 2016 although American seems to run these types of promotions frequently so if you miss out on this one you can always just wait for the next one to come along. And just a reminder that these points do not count toward towards AAdvantage Gold, AAdvantage Platinum, AAdvantage Executive Platinum or AAdvantage Million Miler status qualification and are also processed by a third party so do not count as American purchases.

So should you take advantage of this offer? The answer depends on if you have a specific redemption in mind that would make it worthwhile. Most would say that AAdvantage miles are worth somewhere between 1.5-1.7 cents per mile so the offer in and of itself is not that spectacular. However, that's not to say you can't find instances in which you can get more than 1.7 cents per mile in value for award redemptions as I was able to discover firsthand while planning my trip to Germany last month. The cheapest round trip flights from Indianapolis (IND) to Nuremberg (NUE) are about $1,400 with prices going up as high as $2,900 in some instances for economy but I was able to find round trip economy MileSAAver award tickets for only 40,000 miles each giving me a value of roughly 3.5 cents per mile which is a great value and much better than the 1.7 cents per mile it would cost to purchase in this deal. And if I had elected to fly first class instead the prices increase exponentially to anywhere from $9,000-$11,000 per round trip ticket making any award redemption even more valuable. Plus this doesn't take into account the extra savings I would receive by gaining an extra 5,000 AAdvantage miles for every 20,000 Starpoints I transfer.

While I am in the group of people that believes you shouldn't buy points speculatively unless you have a specific redemption in mind this deal can make sense in certain circumstances. Otherwise, I'd wait until the next promotion comes along. And remember, you can always transfer Starwood points at a 1:1 ratio and you receive an additional 5,000 points for every 20,000 points you transfer which is why Starpoints are probably the most valuable transferable currency out there.
Posted by Flying From The Front at 10:18:00 AM